Passing on the baton 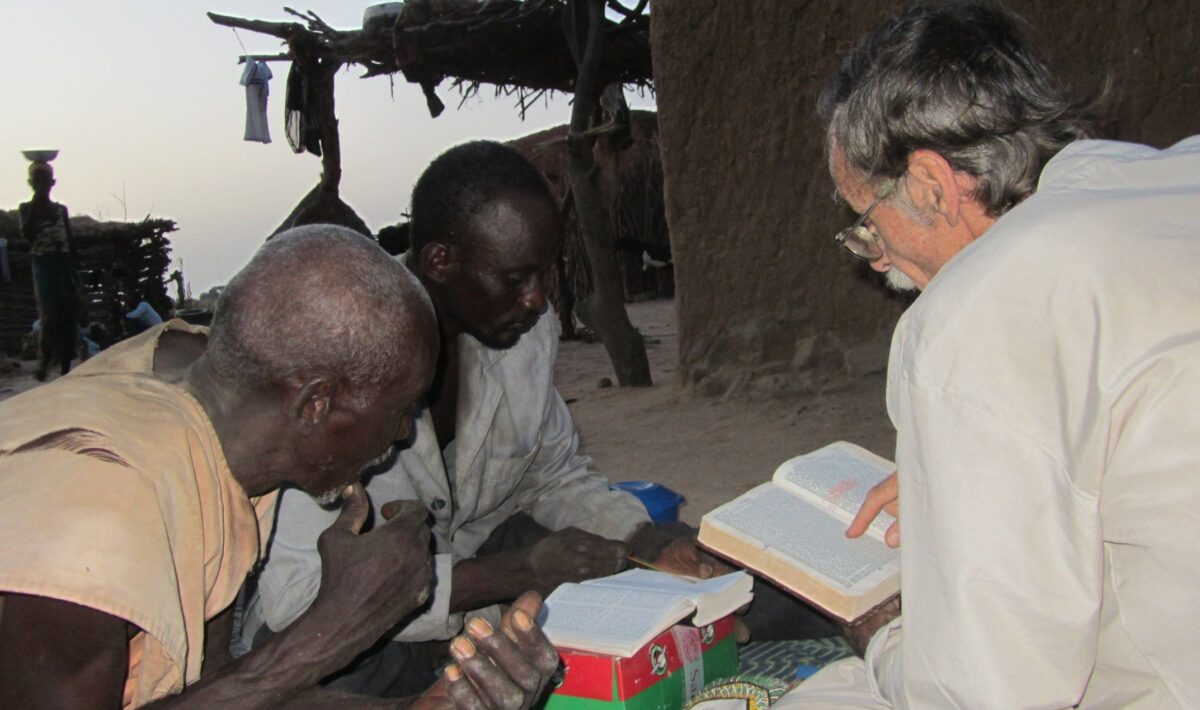 The commitment to see God’s word spread in Niger will be the hallmark of Jonathan and Elaine Burts’ ministry as they retire to the UK after 42 years on the field. Here, they reflect on how they saw God’s faithfulness during their long service.

Elaine and I (Jonathan) joined SIM and went to Nigeria in 1979, where we met, married and had our three children.

Serving in the rural development programme of the Evangelical Church of West Africa (later renamed ECWA – Evangelical Church Winning All) we became convinced it was the Lord’s time to move on as more and more qualified Nigerian agriculturalists joined the work.

In 1987, we arrived in Niger and after some French language learning, we were posted to Gueschemé (left) where we could use the Hausa we learnt in Nigeria.

It became clear to us that the great hunger for mother-tongue literacy was the way forward to both strengthen the existing village churches and to plant new ones. At that time, it was politically very difficult for any village headman to say no to hosting a Christian reading class in his village.

We taught classes ourselves and then in the early ’90s, started posting Christian men as literacy teachers in the area during the dry season.

Every reading lesson had a Bible lesson and the Gueschemé Bible School, which ran from January to April, required each student to do two seasons to complete the school. These graduates became the prime source of literacy teachers for new outreaches.

Later, a four-year residential Bible School for pastors opened in Gueschemé and a good number of our literacy teachers felt God calling them to further training. These men are now serving as pastors and evangelists in many parts of Niger.

From 1998 to 2006, our family was UK-based as there was no English language “sixth form” in Niger. However, we remained members of SIM Niger and my main task was translating Bible correspondence courses into Hausa. Each year, I spent a month in Niger seeing the literacy work and getting the courses checked out.

In 2006, Elaine and I relocated to Dogon Doutchi, which is the northern part of the same church district as Gueschemé, so we knew all the church leaders and used correspondence courses and TEE (Theological Education by Extension) classes to deepen teaching in local congregations.

Through this period, we moved to having more year-round literacy teachers and fewer ‘dry season’ ones. This was what the churches wanted as they saw we were losing people when there was no shepherd living full time with the flock.

The Lord then led us to see the needs of the area south of Gueschemé, where there was only one evangelist for the whole area, so in 2013, Elaine and I moved to Dioundiou (have fun pronouncing that!) where our goal before the Lord was to open up the area for the gospel.

SIM recruited two families to join us and we were blessed to have a young Australian SIMer, Matt Warren, join us – first as an intern and then as a full member of SIM. An Ethiopian family also planned to come, but they ran into difficulties, mostly due to Covid-19.

However, overseas workers are not the backbone of the local church and wherever there was a group of even two or three Christians, we bought a plot and built a small house as a church-owned property for the Nigerien evangelist (making the bricks from scratch!)

We also bought fields, so these families had a place to farm and a way to support themselves after we left.

We were told that Christians would not be able to buy land, but the Lord is the Lord Almighty and even if one family vetoed a sale, another quickly came forward and we had more offers of land than we required.

There are now eight villages in the two northernmost Dioundiou sub-districts, with housing and most with farmland.

In the Spring 2020 issue of SIM UK’s Serving Him magazine, we asked supporters to pray for a village in Niger where the Jesus Film was shown. Six married men and a primary-aged boy asked to follow Jesus.

In a second village, three men became Christians when the film was shown and a fourth man a week later. In a third village, there was one man and a young teen. These are all in the Dioundiou area.

It is early days yet and the work of sowing the precious seed takes time, but there will be a harvest and we are seeing the first fruits.

One of the greatest blessings of long-term service in one area is to work aside young pastors and evangelist whom you taught when they were children. Now as adults they are co-workers and the future. They are Nigerien believers and will stay as we leave. The baton is passed, but fellowship in prayer and communication remains.

Jonathan and Elaine’s prayer letters over the years tell us some amazing stories about their faithfulness and God’s goodness amidst the ups and downs of rural life in Niger, West Africa, writes Angus Reid, SIM UK Mobiliser for South-East England. As they retire after decades of service, it’s impossible to capture everything, but below are just a few glimpses:

2000: Jonathan edits an ajami version of Luke’s gospel, and a Bible correspondence course is translated into Hausa.

1998: Issa walks with a single crutch after all medical hope seems gone. And he had seen his brother come to faith, too!

2005: Jonathan and Elaine seek to strengthen believers scattered across a wide area by coordinating TEE (Theological Education by Extension).

2014: The Burts work on audio ministry, translating The Way Of Righteousness series into Hausa.

2015: Jonathan and Elaine build houses for evangelists – and the bricks have to be made from scratch!

2017: 230 students go through the Read and Live literacy classes, and a number come to faith. Rainy seasons are taking their toll on gardens, church buildings and the evangelists’ houses.

2018: Students graduate from the Bible School where Jonathan has taught.

2020: A taste of practical challenges the Burts face… mains power cuts; FM radio transmitter breaks; several car problems; residence permit issues; a rise of terrorism; and a road accident. On the other hand, there is a literacy class with two new Christians.

This was posted on 14 July 2021 in Ministry stories and Training and equipping.
Tags: Bible teaching, Education, Niger, Outreach