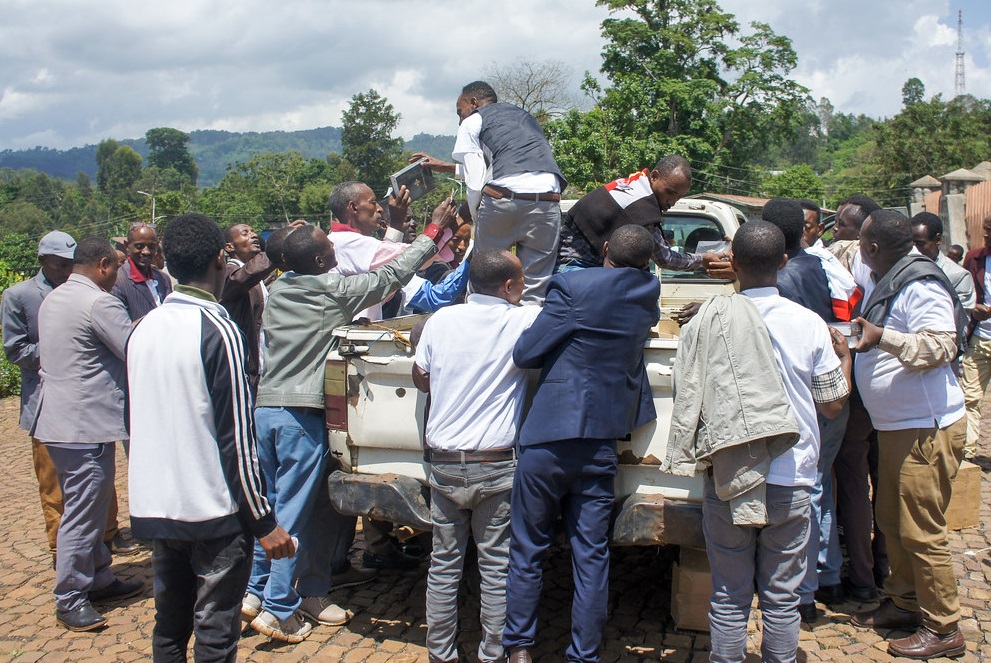 The Kafa Bible was dedicated in Bonga, Ethiopia, earlier this year. Read about this labour of love spanning more than 40 years.

After a labour of love spanning more than 40 years, the Kafa Bible was dedicated in Bonga, Ethiopia, earlier this year, writes SIM South Sudan’s Tohru Inoue.

Among those witnessing the dedication were Matewos Gebremariam and Carolyn Ford, representing the translation team – the latest in a long list of people involved, which just like the genealogies in the Bible, spans a lengthy period of time.

The translation work was begun in 1981 by SIM New Zealand mission worker Ruth Cremer. Ruth arrived in Ethiopia in 1954, aged 23, called by God through the verse: “You also, O Ethiopians, shall be slain by my sword.” Zephaniah 2:12

Ruth then recruited and mentored a number of native Kafa speakers to help with the project.

Many of the earlier translators’ names above didn’t see the end of their work. Some came for a season, and like working on a farm, tilled the soil but never got to see any buds form. Others tended the weeds, but left this earth before the flowers bloomed. They passed away, leaving behind their work for a whole new group.

At the dedication ceremony, the book of Ruth was read. It was an interesting choice as it, too, tracks the story of those who remain behind when others have left too soon.

In the story, Naomi’s husband and her two sons die, leaving her and her two daughters-in-law widowed. At this point, you would be forgiven for believing that the genealogy ends there – that no more names would follow on.

But if there is something I’ve learned from reading the biblical genealogies, even when it looks like names have run out, God keeps going until he’s finished his work.

Even after some names had left “early,” God added names who saw the translation work through. Some names came and translated the minor prophets; others came and did the Psalms, and others still typeset the text. And now, after all those names listed at the top, we’ve witnessed the fruit of the completed Kafa Bible!

But fruits in turn produce seeds that yearn to be planted again. Holding the fruit of the Bible dedication is not the end, but a chance to grab a handful of this beautiful new seed and scatter it extravagantly until it finds good soil to start all over again. That will be the work for a whole new generation of names God adds (a name like yours, perhaps?)

His work is carrying on because it’s not done until he’s written in the last name.

The Kafa language is one of 86 indigenous Ethiopian languages and spoken by more than a million people.

Even though a Kafa New Testament translation has been available since 2001, Christians in the region have had to listen to sermons translated from Amharic, mainly because pastors didn’t have a full Bible in the Kafa language.

Many people are also unable to read and write in their native Kafa – so the translation team has also produced an audio recording of the new Bible, which will truly change life there.

This was posted on 29 July 2021 in Bible access and Ministry stories and Translation.
Tags: Bible translation, Ethiopia