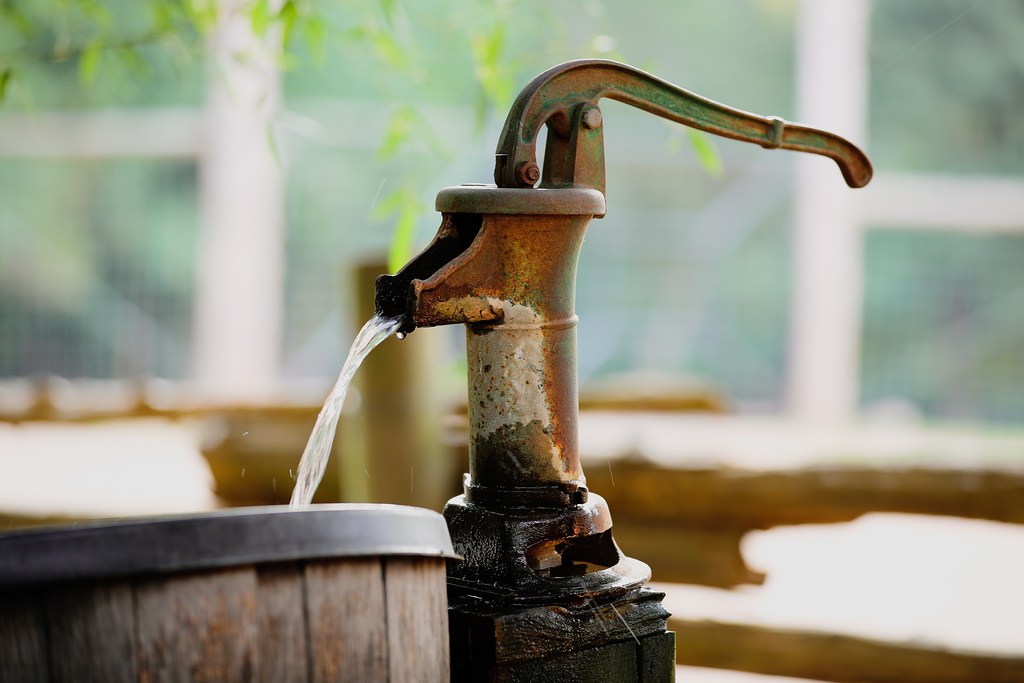 Read how God is using water pumps as tools to open people’s hearts to the gospel.

It was a scorching afternoon in West Africa, with the sun searing down on a team of mission workers visiting two villages near their new home.

Peter*, a Faithful Witness mission worker, says their hosts were eager to offer refreshment and he was all too eager to accept … until he realised the water they poured was yellow-brown in colour.

“I was really parched by then,” Peter recalls. “It was the usual water the villagers drink every day, but I couldn’t take it because I knew I’d get so sick if I drank it even once.”

Instead of partaking, Peter listened as the villagers told him their needs. The majority reported stomach issues and most expressed dismay at a severe drought that occurs every few years and results in famine.

Peter left with a burden on his heart and an idea forming in his mind: “I thought about what we should do to eradicate this problem, because it’s a cycle.”

He drew up plans for a water reservoir that would provide a reliable supply of clean water to both villages and with the help of an SIM area director, he applied to the Nomadic People’s Network for funding for his project.

Around 50 organisations sent in grant applications, but only a handful of projects received support — Peter’s was one of them.

He soon returned to the region with supplies, a plumber, and an electrician and described “a celebration” as the crew started.

“People came out of all their houses, shouting in their traditional styles. The youths met us halfway on their bikes and escorted us to their village. Everyone came out shouting and banging. That was how they welcomed us.”

Faithful Witness team mate Andrew*, recalls: “They were all so jubilant. I had tears in my eyes and in my heart, I said, ‘Oh, Lord Jesus, how I wish it was you they were welcoming.’

“Imagine, if the villagers have this much excitement for their physical needs being met, how much more their excitement will be when their spiritual needs are met?”

As work began on the first reservoir installation, the project received lots of attention. The Faithful Witness team gathered to pray over the work and many of the Muslim locals asked each mission worker to pray in his or her tongue.

Peter recalls: “The villager would say, ‘Now you pray in French, now you in English!’ Their language is Arabic, so I don’t know if they understood the prayers or not, but the elders like to hear us pray and I was surprised that when we finished, they shouted, ‘Amen, amen!’

“I was so fascinated by that and am sure the Spirit is working in their hearts.”

Everyone did their part to help, with the villagers digging, collecting sand, and moving gravel. “That’s the joy of coming together,” Peter adds.

Throughout the process, Peter prayed and asked God for guidance on where to place things as he’d never worked on a project like this before.

Typically, villages will install solar panels at the bottom of water pumps, but Peter decided to install them higher up, where nobody could tamper with them.

Today, the village consistently has safe, running water, but because the pump doesn’t always produce steady water, Peter and his Faithful Witness team continue to pray for restoration and provision in the village.

Word has spread and new villages are approaching the Faithful Witness workers asking for their own clean water. Eventually, Peter would like to teach his neighbours how to garden more efficiently.

They eat mostly rice, noodles, and meat, but with fresh water, they could start growing green crops.

Most importantly, Peter and Andrew believe God is using the pumps as tools to open people’s hearts to the gospel and they are thrilled to be involved.

This was posted on 8 October 2021 in Compassionate ministries.
Tags: Faithful Witness, Outreach